Tantrum Books and author Andrew Buckley are unveiling the cover to THE PERILS OF GROWING UP WEREWOLF, the second book in the young adult paranormal/urban fantasy series, Hair in All the Wrong Places: The Perils of Growing Up Werewolf, releasing October 3, 2017. See below for the cover, information on the book, and pre-order links. 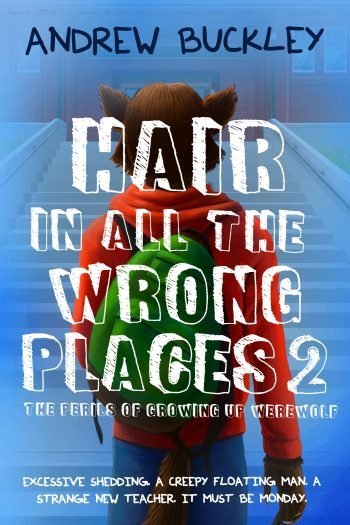 Synopsis
Being a werewolf is no picnic. Colin’s constantly hungry, spends a ton of time shaving, and fights to keep his emotions in check to avoid turning into a giant, drooling, hairy, smelly, howling wolf. But Colin’s not the only creature hanging around the town of Elkwood. Vampires, zombies, goblins, ogres, and other questionable visitors and their various shenanigans have got everyone on edge.

Colin just wants to live a normal life, date, and get his homework done on time. But the town of Elkwood needs him. So when a secret government organization asks for his help, will he be able to control the animal inside, or will he give in to the perils of growing up werewolf?

About the Author
Andrew Buckley attended the Vancouver Film School’s Writing for Film and Television program. After pitching and developing several screenplay projects for film and television, he worked in marketing and public relations, before becoming a professional copy and content writer. During this time Andrew began writing his first adult novel, DEATH, THE DEVIL AND THE GOLDFISH, followed closely by his second novel, STILTSKIN. He works as an editor for Curiosity Quills Press.

Andrew also co-hosts a geek movie podcast, is working on his next novel, and has a stunning amount of other ideas. He now lives happily in the Okanagan Valley, BC with three kids, one cat, one needy dog, one beautiful wife, and a multitude of characters that live comfortably inside of his mind.

Andrew is represented by Mark Gottlieb at the Trident Media Group.