Welcome to the blog tour for THE LAST ATLANTIAN, a stand-alone young adult urban fantasy/mythology, by Mikki Noble. See below for information the book, buy links, an exclusive excerpt, and details on her giveaway. 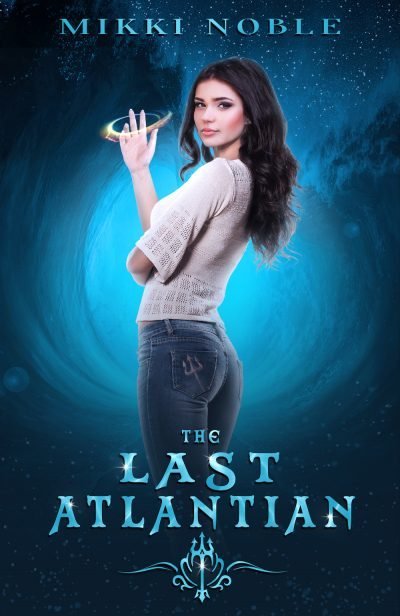 THE LAST ATLANTIAN by Mikki Noble

What Spencer doesn’t know is why. Why is all this happening to her? Why does she have the power to turn people into gold all of a sudden. Who is she really?

And why is this cute guy calling her the last Atlantian?

Excerpt #1
Steamy fog sprayed from the espresso machine as Spencer slammed the lever all the way down. She shouldn’t have had to work, today of all days. But the universe obviously hated her and it was punishing her.

That was the only explanation.

“Stop moping,” her best friend Cia said, shoving a tray of mugs beside the gurgling coffee machine. “Your boyfriend’s here.”

Spencer groaned and rolled her eyes. She tried not to be angry with her friend but refused to look at her. It was all right to be upset, but not good to show it. Although, technically her shift hadn’t even started yet, but Cia’s cute friend just had to have a latte and couldn’t wait, so Cia let him in, without asking Spencer first.

This left just enough time for him to show up and squeeze his skinny frame through the doors, according to Cia. Spencer would bet that Cia held the door open and even waved him over.

“Not my boyfriend,” Spencer told her through gritted teeth.

“But does he know that?” Cia asked, smirking in that annoying way she did. One side of her mouth turned up and her brown eyes went dark, almost black.

Spencer looked around the machine to see she was right. Josh, she thought his name was, stood at the counter taking off his gloves, eyes finding hers instantly. A smile lit up his face, although his cheeks had a slight color from the cooler December air. Spencer only nodded and went back to finishing up the latte order.

Josh was kind of cute, light eyes, strong chin. Although he had to be in his mid-twenties and he was just a touch creepy. He was in here every day and he stared when he thought she wasn’t looking. He would sip at his coffee and she’d feel his grey eyes on her. And he’d always be toying with this pretty blue pendant he wore on a black rope around his neck. Spencer only caught a glimpse of it one time, because he kept it hidden under his shirt or in his hand most of the time, but it was pretty. Some pitchfork looking thing.

“She will be right with you, Jeremy. She’s just finishing up an order.”

Jeremy, that was his name. Right. She never remembered his name.

Yeah, an order that I shouldn’t have to make for another… Spencer’s eyes went to the little clock on the wall in the back. Half an hour.

Spencer just wished that this guy would let someone else serve him, but no. If she was on shift, he would wait for her.

Why did she have to work today? At least, no one told him it was her birthday today. For some reason, she didn’t want him to know.

As luck would have it, the next words Cia uttered were, “She’s grumpy because she had to work on her birthday.” Spencer noticed that Cia leaned in close to him and pretended to whisper, even though Spencer heard her quite clearly.

Mainly because there were four people in the shop and only one person actually working.

“On her birthday? That’s too bad.” Jeremy smiled from ear to ear, running his thin fingers through his thick, black hair.

Yeah, and I thought I was lucky enough to have the day off school today. Then Cia’s parents had to call and shatter that hope.

Spencer decided she might as well get this part of her day over with so she could celebrate her day, tossed a lid on the latte, called out for Cia’s friend and then made her way over to Jeremy.

She offered him a smile, but it was robotic at best. Normally, she dismissed Jeremy’s actions as a bored guy with nothing better to do, but today, she didn’t feel like dealing with him. She just wanted to go out and hang out with her friends, do fun stuff. After all, she was seventeen today. But when her parents wouldn’t help her get a car, she decided that she’d get the thing herself. Fast forward to today, and she was stuck working.

“Hi, what can I get for you?” she asked, finger hovering over the computer screen, taking in the scent of his cologne. It wasn’t terrible, but it was too much, too powerful. It almost made her gag.

Spencer shuffled uncomfortably. The way he was looking at her made her insides crawl. Couldn’t her best friend in the whole world see how uncomfortable this guy made her? “Bad day. Would you like the usual?”

His smile faltered a bit, but he still aimed his grey eyes at her and he was leaning over the counter so he could be closer to her. Seriously, Cia should see something is wrong here. Thanks for nothing, Cia. “I don’t suppose you’d give me your number.”

A loud bang from behind Spencer made her jump. Cia called out, “Sorry.”

Spencer used the opportunity to sneak away and grab Jeremy/Josh’s coffee order. On the off chance that he’d forget what he asked and she’d be home free by the time she slinked back over to the counter to bring him his coffee.

Spencer poured, noticing her hand was shaking. Normally she didn’t let it get to her but today seemed different. She couldn’t say why, but he seemed to crawl deeper under her skin today. She shivered and prayed it was almost time to open the shop. With people impatiently waiting on their caffeine fix, she didn’t have time to talk to him and Spencer liked it that way.

She stalled as long as she could. When Cia came out from the back with a stack of to-go cups, Spencer turned and gave the guy his coffee. He held out a twenty and she took it silently, hoping they didn’t have to talk anymore.

But then Cia went back to the back of the shop.

Spencer gave the guy a strained smile as she reached over to give him his change. He grabbed her wrist and pulled her closer to him. “You should give me your number, Spencer. We’ve been dancing in circles for too long,” he whispered.

Spencer’s heartrate changed, sped up. She felt herself begin to sweat and shallow breaths were the only ones to reach her lungs. He was so close she could see his pupils dilate.

She tried to jerk her arm free, but he refused to let go.

“Just give me your number, Spencer. No need to play shy.”

Spencer shook her head and grabbed his hand to remove it.

It all happened so quickly, she could have blinked and missed the entire moment. Josh… or Jeremy… or whatever his name was, stood before her, a six-foot solid gold statue. The grey eyes that had just dilated in need for her and creeped her out, were now cold, metal and unseeing. A gasp slipped from her throat. She wanted to scream or cry. She wasn’t sure which.

The hand gripping her arm hurt and that’s where she decided to focus. It took her a few tries to twist her wrist from his grasp, but as soon as she shook loose and jumped back, Cia came back to the front of the shop.

She squealed and dropped the handful of coffee bags she’d been holding. “What the heck happened here? I run to the back for supplies and suddenly there’s a gold statue at the counter.” She stared at the statue, not looking over and seeing the terror on her best friend’s face.

Spencer couldn’t speak. She couldn’t open her mouth to form words. Her brain wouldn’t even form any words. If it was, it wasn’t relaying the message to her mouth.

Finally, Cia turned to Spencer and must have noticed the horror on her face. She took a step closer, kicking at one of the coffee bags. Spencer watched it slide along the tile until it hit the baseboard and bounce less than a centimeter. She backed away from Cia, for her own good. It was too risky and Spencer didn’t want to be touched. She didn’t understand what had happened and there was no way she’d risk hurting her best friend.

Spencer shook her head and shrugged. “I… I-I think I did that to him.” Spencer pointed, but she couldn’t quite look at the guy… the statue. “He… grabbed me and… I don’t know.”

“Him?” Cia’s eyes went from the statue to her friend and back. “Is that… That’s Jeremy?” She squinted at the statue and then it seemed like she was finally starting to understand. “He grabbed you?”

“Good thing we haven’t opened yet,” Cia muttered. “Hey, do you think maybe we could melt him down and sell him?” 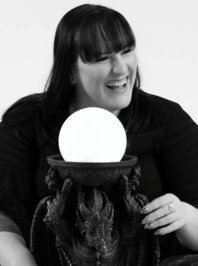 About the Author
As far back as she can remember, Mikki was creating characters and stories in her head. It wasn’t until fate brushed the tip of its wings over her eyes that she began to see that writing was what she was born to do. She loves animals, reading, everything supernatural related, and enjoys spending her free time on social media whenever she can.