Today is release day for LEGENDS, the first book in the young adult urban fantasy series, Posse, by T. Hammond, See below for information on the book, buy links, an exclusive excerpt, and details on her giveaway. 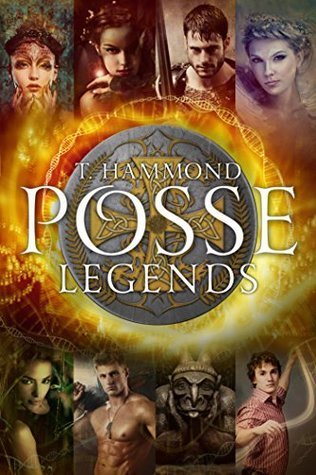 Synopsis
It should have been an easy job. Track the jackal. Locate the girl. Rescue said girl. Return bad puppy to the Council for questioning.

As leader of the Posse, a paranormal alliance, shapeshifter Lexa O’Clare thought she’d seen everything over the past millennia. Neither she, nor her vampire partner, Etienne, expected this case to be different.

A fugitive werejackal leads them to a secret lab where supernaturals are unwilling subjects in genetic experimentation. The Posse uncovers a conspiracy implicating high-ranking members of the Inter-species Council.

Can anyone’s motives be trusted?

Lexa: a shapeshifter sheriff who also proxies for humans killed before their destinies are fulfilled.
Etienne: a Knight Templar, turned master vampire.
Yasmin: a dragon who walked among the gods.
Jade: an historian & Fox-familiar to a cranky dragon.
Sentinel: a gargoyle who mourns the fall of Atlantis.
Richard: a witch with a target on his back.
Tris: a rare polyshifter with an eye for a sexy male.
Rhys: four months ago he was human…

“Good, gracious, I’d love a bite of that!” Sorcha gasped as she watched the naked wolf strut down the porch steps. In my efforts to adjust the porch swing cushion along my spine, I’d missed my opportunity for a full-frontal analysis. Not to worry—the view from the back was noteworthy.

He must have heard us. Without breaking stride, he looked over his shoulder and winked at my best friend.

It was unusual for Sorcha to notice nakedness, let alone comment, but I’ll admit she has unquestionable taste in men. This one was built in typical beluae-fashion—long, ropy muscles over a tall, broad-boned frame. The wolf had the dark-haired, sloe-eyed Latin looks characteristic of the Pyrenées Mountain Pack. Young members were already gathering for a mid-morning run along the beach, and unlike the more conservative shapeshifter race, werewolves were fairly blasé about nudity, making these vacations to Sorcha’s family in the Basque Country something of a visual feast.

“Sorch, that is so not for you. Look away, look away.”

“Can’t help myself, Tris. How in the hell does he not tip over onto his face, holding up something that size?”

“Seriously, Sorch, I can see the attraction, but you’ve gotta stop drooling. What would your boyfriend think?” I wasn’t sure who the flavor-of-the-week was, but I’d seen her canoodling with another wolf earlier this morning. With my chum, there was always a male friend, even if they passed through her life so fast I rarely got names.

“Huh?” She finally looked away from the sexy beluae to give me a puzzled frown. “What does Sancho have to do with cake?”

All right, now it was my turn to say it. “Huh? Cake? I thought we were talking about the wolf’s, err, package?”

“His…” Her face scrunched up in a particularly sour expression. “Ewww, you pervert. That wolf is my brother, Bennet. I wasn’t talking about his…his tackle and whirlygigs. Ewww!”

“But…” A glance toward her brother, who’d stopped at a large picnic table, showed me what I’d missed from my earlier examination of his, err, assets—a towering, three-tiered sheet-cake, balanced between his wide-spread hands. Now in profile, he chose to look up, meeting my eyes with a wide grin. Damn beluae hearing, he no doubt heard the whole exchange between me and his sister. In fact, looking around to an array of amused smiles, his siblings were also aware of my misunderstanding.

“I never saw…I thought…” I plopped my head into my hands, wishing I could disappear.

Sorch laughed. “Superior werewolf balance?” she parroted. “You’re so hysterical. This is why I keep you around.” 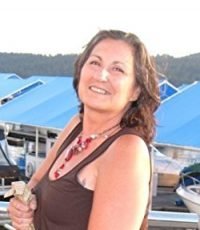 About the Author
T, a paranormal romance and urban fantasy author, feels writing is not a calling so much as it is a compulsion. No one is more surprised than she is when characters take over the plot and dialog, (re)directing stories in directions she had not (consciously) intended. Although T starts out each novel with a basic outline, she finds one or two chapters into the novels, not only have the characters shredded her outline into tiny unidentifiable pieces, they use the resulting confetti in a nose-thumbing parade.

T is fully convinced the writer is the tool a story uses to tell its tale.