Welcome to the release week blitz for SEDUCED BY SNOWFALL, the third book in the adult contemporary romance series, Lost Harbor, Alaska, by USA Today bestselling author, Jennifer Bernard. See below for information on the book, buy links, an exclusive excerpt, and details on her giveaway. 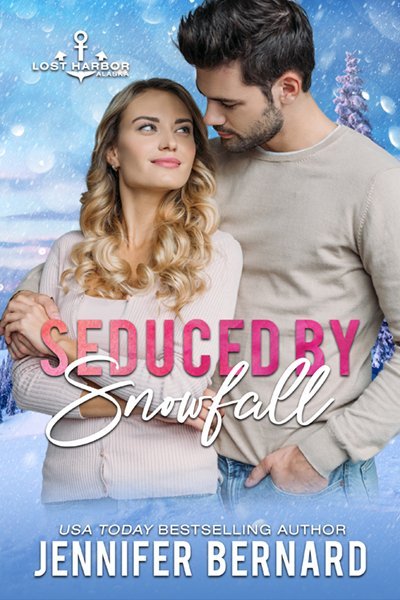 Synopsis
Dr. Bethany Morrison is used to being the responsible one. The serious doctor everyone relies on. She isn’t used to needing a rescue–especially from a sexy, lighthearted firefighter like Nate Prudhoe. And yet ever since she moved to Lost Harbor, Alaska, he’s been there for her. Is it any wonder she turns to him in her most embarrassing moment—when she needs a fake boyfriend?

Nate’s more than aware that Bethany doesn’t take him seriously. And that’s fine; relationships, a family of his own…those things aren’t for him. Not when he knows how painful the loss of a loved one can be. But when he discovers a mysterious injured runaway hiding out in the firehouse, it’s his turn to ask the lovely doctor for help.

As winter closes in, the line between fake and forever keeps disappearing. How could Nate know that every moment spent with Bethany would chip away at the shield around his heart? How could Bethany guess that Nate’s brand of laid-back fun was exactly what she needed? It may take more than a snowstorm to make them see it’s okay to want it all…and to grab it before it disappears forever. 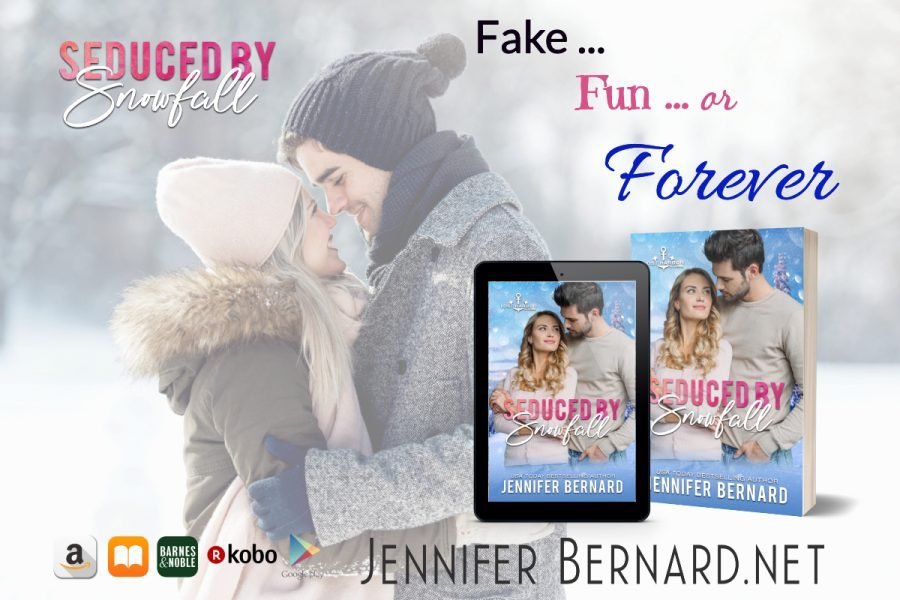 Excerpt
Nate could still remember the call that had come in around ten o’clock that night. The dispatcher had been taking a cigarette break, so Nate had been the lucky one to field the call.

“This is going to sound ridiculous, but I just moved in and a squirrel came into my house and I was trying to chase it outside and then there was a moose and, well, long story short but I locked myself out, and I haven’t made duplicate keys yet so I don’t have a way to get inside.”

The woman had sounded out of breath and rattled—not unusual for calls to the firehouse.

“I’ll be right there. Where are you located?”

She rattled off the address, which was within walking distance. But instead of walking, he hopped in one of the department vehicles. He didn’t want to freak out a newcomer by showing up without something official-looking.

When he arrived at the house, which he recognized as a rental often leased by hospital staff, he didn’t see anyone waiting for him. Had she found a way inside? An open window or something?

“Hello, I’m from the fire department,” he called. “Anyone here?”

Then the alders rustled and someone jumped into view. A woman with wet hair and a towel wrapped around her body picked her way barefoot across the grass. She shivered in the late August night air. In one hand she held a plunger and in the other a cell phone.

“Hi. This is extremely embarrassing, but I happened to be in the shower when the squirrel came in and…”

He held up his hand. “No explanation needed.” His gaze strayed to the toilet plunger. “Although that…”

“I was in the bathroom, it was the only thing on hand.” She waved it at him. “It worked on the squirrel.”

He glanced at her other hand. “And you just happened to have your cell phone with you?”

“That’s the only lucky part. While I was chasing the squirrel, I saw a moose right outside the window.” She gestured toward the bushes along one side of her house. “I’ve been wanting to get a good moose photo ever since I got here, so I grabbed my phone. The plunger is in case he attacked me.”

“Word of advice, never try to fight a moose with a plunger,” he said gravely.

Even with just the light from the front porch, he could see her flush. “Yes, I…can you just…maybe just get my door open?”

He showed her the tool he’d brought, which might or might not work on the front door. “I may have to pry open a window if this doesn’t work. Do you want to sit in the car while I work on it? Heater’s going.”

“That’s okay. I’ve never been in a police car before.”

“It’s not technically a police car, it just looks like one. I’m a firefighter. One of only three staff firefighters in town. Mostly we’re a volunteer department.”

She gestured with the plunger again. “Can you just…”

“Of course.” He strode to the door and inserted the pick. “I can tell you’re new around here because a lot of people in Lost Harbor don’t even lock their doors. Some don’t even have locks to start with.”

“That’s crazy. I could never live like that.” She shivered again.

“Are you sure you don’t want to wait in the car? I promise not to arrest you unless you use that plunger inappropriately.”

She finally let go of the plunger and propped it against the front steps. “I’m a doctor.”

“Okay.” He wasn’t sure why she felt compelled to mention that.

“I got straight A’s all the way through college. I don’t usually make boneheaded mistakes like locking myself out of my house.”

“Things happen. Don’t beat yourself up about it.”

“That advice sounds good, but is it really? That’s how I got through med school, by beating myself up.”

“Suit yourself, then.” He wiggled the pick in the lock. “Hey, I left my jacket in the backseat if you want to grab that.”

She padded across the lawn to the car and used one hand to hold her towel together while she opened the door with the other. When she returned, she wore his navy blue Lost Harbor Fire Department jacket over the towel, which made for an interesting—and surprisingly sexy—look.

He ignored that fact and focused on the lock.

“Where’s the squirrel? In the house or out?” he asked as he felt the tumblers give way.

“I’m not actually sure,” she admitted. “I thought I chased him out, but it was all a blur.”

“Understandable. All right, you might want to step back.”

He shrugged and opened the door.

A ball of fur streaked between her legs. She shrieked and lost her balance. He reached out to grab her before she hit the ground, and her towel fell away. Luckily, she still wore his jacket, which covered her all the way to her upper thighs.

Windmilling her arms in the air, she crashed into him and the next thing he knew, he was tumbling backwards. She was falling too, and by instinct, he grabbed her so he’d land first, with her on top.

Which was how he found himself sprawled on the grass with a naked stranger on top of him. 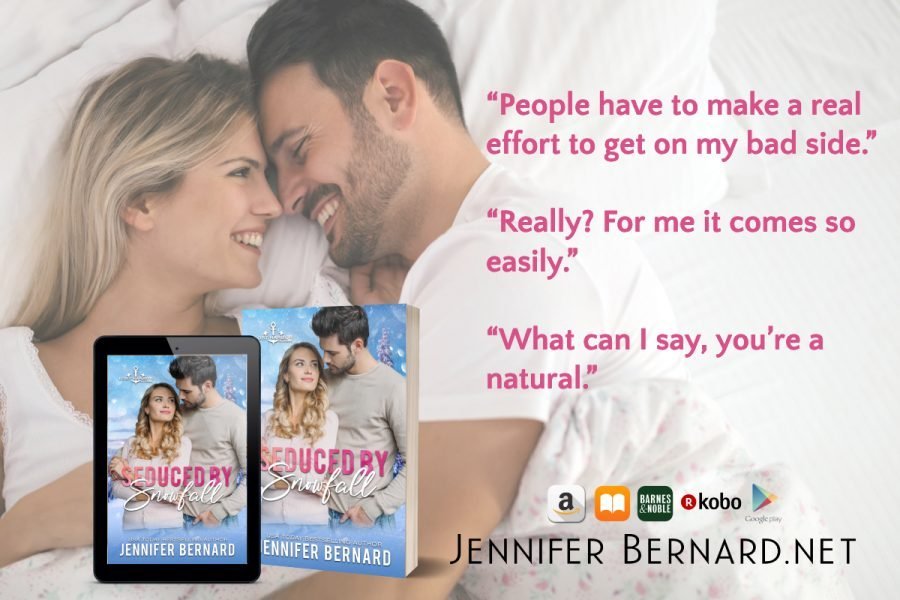 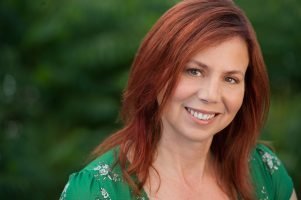 About the Author
Jennifer Bernard is a USA Today bestselling author of contemporary romance. Her books have been called “an irresistible reading experience” full of “quick wit and sizzling love scenes.” A graduate of Harvard and former news promo producer, she left big city life for true love in Alaska, where she now lives with her husband and stepdaughters.  She still hasn’t adjusted to the cold, so most often she can be found cuddling with her laptop and a cup of tea. Sign up for her newsletter for book news and fun exclusives.