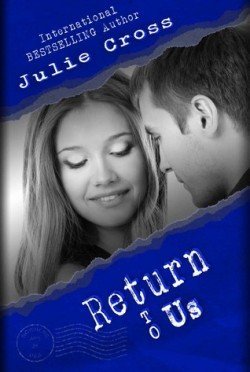 Return to Us (Letter to Nowhere #4) by Julie Cross

Synopsis
30,000 word novella and part 4 in the 2014 RITA Finalist Letters to Nowhere series

Summer is definitely heating up…

Not only is TJ dealing with a decent sized bruise on his face where Karen gave her best attempt at a knock-out match, now he’s got some explaining to do after Jordan finds out what happened.

Karen’s not ready to forgive TJ for his tough-love tactics to help get her bar routine back in full swing, but she is ready to figure out how to get through to Jordan. He’s being a complete idiot, not dealing with his health issues, forcing her to keep things a secret from Coach Bentley.

With her teammate, Stevie’s, help Karen comes up with a plan to steer Jordan in the right direction—all she needs is a night alone with him and the hiking and camping expedition he promised her weeks ago might be the perfect opportunity.

Or her plan could backfire and he could slip further away from her.

While Karen and Jordan are out playing lumberjack couple in the Pocono Mountains, TJ is dealing with a stranger trying to give him advice on his tumbling, some pretty overt advances from one of Nina Jones’ gymnasts (aka: off limits), and a random hook-up that will most likely end up being a big mistake.

My Review
This is my favorite installment in the Letters to Nowhere sequel so far.  This time around, we get to hear from TJ, get inside his head and roll around, see some of the things that make him tick. I wasn’t so sure at first about this added point of view. I initially felt like it halted the momentum of what was happening with Jordan and Karen, but ultimately, I think it worked really well. TJ is a fascinating character, so spending more time with him can only be a good thing.

Things between Jordan and Karen continue to take two steps forward and one step back, but they both remain true to who they are, proving that even the seemingly perfect couples aren’t actually perfect. But neither Karen nor Jordan becomes someone else in order to drive conflict. Instead, forces outside of them test their relationship as well as their friendship in an organic way.

Plot
The plot picks up where Return to You left off, furthering the conflict between Karen and TJ, between Karen and Jordan, and between TJ and Stevie. Although the conflict between TJ and Stevie is the highly-charged sexual kind. Karen hates that Jordan is forcing her to keep things from his father, her coach. Jordan hates that Karen is pressuring him. Karen hates TJ for pushing her, even though it seems to have worked. And Stevie and TJ have some serious underlying chemistry, making his meaningless hookups somehow seem even more trivial.

I don’t know if this is the last installment in the series or not, but a lot of things are left hanging. I will be waiting less than patiently for whatever is next in this wonderful series.

Characters
Getting inside TJ’s head for the first time was a little unnerving, but the more time I spent there, the more I liked it. The more I’ve come to like him. I’ve always found him fascinating and loved the fact that the author added him. But now that I get to spend more time with him, hear his thoughts, I like him even more. I can’t wait to see what happens with him next.

Karen and Jordan remain true to themselves as they wrestle with things outside their control. There is some character development on both of their parts this time around which was nice to see.

Top Five Things I Love About  Return to Us
1. TJ and Stevie. Still love these two tough-talking characters. Love them even more when they are sparring with each other. It’s just fun to watch.

2. TJ and the Stranger. I knew who the stranger was after about the second directive he uttered, but reading TJ process it gave me more insight into him than almost anything else.

3. Karen’s Awakening Sexuality. Man, she is so uncomfortable with her own body sometimes. It’s both cringingly awkward and innocently delightful to watch. There were several laugh-out-loud moments involving this.

4. Karen’s Plea to Jordan. Without giving anything away, when Karen confronts Jordan about his health, it’s a raw emotional scene that packs a punch.

5. The Three-Word Challenge. It’s funny and cute and so Jaren.

Bottom Line
Return to Us is a fresh addition to this fantastic series, allowing the characters to grow, and introducing us to TJ’s thoughts.

About the Author
Julie Cross lives in Central Illinois with her husband and three children. She’s a former gymnast and longtime gymnastics fan, coach, and former gymnastics program director with the YMCA.

She’s a lover of books, devouring several novels a week, especially in the young adult and new adult genres.

Outside of her reading and writing credentials, Julie is a committed—but not talented—long-distance runner, creator of imaginary beach vacations, Midwest bipolar-weather survivor, and expired CPR certification card holder, as well as a ponytail and gym-shoe addict.