Welcome to the blitz for THE ABYSS TRILOGY, a young adult dystopian fantasy series, by A.C. Ward. See below for information on the series, buy links, an exclusive excerpt, and details on her giveaway. 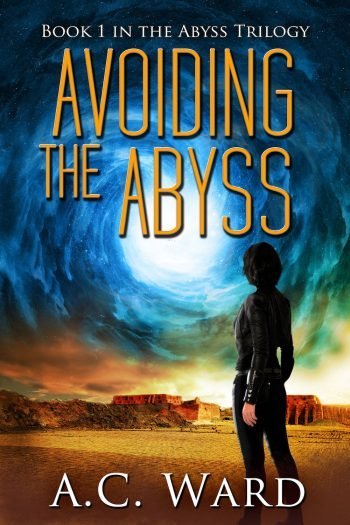 AVOIDING THE ABYSS (The Abyss Trilogy #1) by A.C. Ward

Synopsis
Aubrey has always been told she isn’t special. If only that had remained true.

Aubrey grew up as part of the rebel movement, protected but lonely. All she wants is her mother’s love, but without an ability she’s worthless in her mother’s eyes.

When she’s captured by the government, Aubrey sees an opportunity to prove her worth. Instead, she realizes that her mother has been withholding many truths. Aubrey experiences an acceptance outside of the rebels that her heart has yearned for, and a discovery. She has an immunity that has never been seen before.

But Aubrey isn’t immune, she’s absorbing powers as the key to the Abyss—a portal into the demon realm. Her mother finally sees purpose in her daughter and hopes to use it for her cause. Aubrey isn’t as certain. If she doesn’t gain control of her ability, she’ll open the gateway to hell and destroy everyone she’s come to care about. Including herself.

The first installment in the Abyss trilogy, a coming of age YA dystopian fantasy. Perfect for fans of dystopian worlds, apocalyptic prophesies, and demon lore.

Download now to find out if Aubrey will succeed in Avoiding the Abyss.

Excerpt #2
Cliffs rose in the distance, but for once they weren’t red. Instead, everything was sepia-toned, the brownish-orange hue like nothing she’d seen. The rebel base nested in the rock, whole and safe, with no smoke drifting up. A scent of something rotting or dead filled her nostrils instead.

The alley she stood in was both familiar and different. No one was there but her. The vast emptiness of the land echoed inside her heart. She wrapped her arms around herself. The feeling of being watched raised the hairs on her skin.

In the sky, the suns didn’t blaze down. Two black circles blocked their light, with a thin line glowing along the edge of the obstruction. On the horizon, both to the east and the west, the barest orange hue shimmered as if sunrise and sunset were occurring at the same time. A perpetual twilight ruled the otherness of the world surrounding her.

Shadow bands glided across the ground, making the space beneath them appear not to exist. Whatever they touched was gone in that instant but returned when the shadows moved on. They streaked toward her.

“Aubrey.” Her name drifted on the air as the shadows drew closer. Her feet moved on their own, keeping just out of the shadows’ reach. Her own name slithered to her again. “Aubrey.”

Her heart pounded in her chest, a rapid beat that didn’t drown out the whispers. Aubrey ran, her footsteps silent on the dirt, even her panting breaths making no noise. The slithery whispers chased her, the only sound in the world around her.

“Aubrey Vale.”  The new voice halted her like a command, both resonant and melodic. The whispers evaporated as soon as it spoke. She could feel the presence behind her, compelling her to turn and face it, impossible to resist. Her body began to pivot, her breath caught in her throat.

The shadowy world blinked out of existence.

Counselor Farrell’s face hovered above her, her hands pulling Aubrey out of the salty water. The counselor’s lips moved, but music flooded Aubrey’s ears, blocking out the words. Farrell snatched the headphones off her, and concern flooded her face. “What’s wrong? Why are you so frightened?”

Behind the counselor, another woman hovered, her expression serene as she clasped both sides of Farrell’s head. The woman’s gown flowed around her, a shawl curling into the air as if floating on water.

“You have to talk to me, Aubrey,” Farrell’s voice came to her as if down a tunnel. “Otherwise, I’m bundling you off to the medical room.”

Aubrey forced her eyes to open. The floating woman had vanished.

The gentleness of her touch caught in Aubrey’s chest. “Bad dream.” 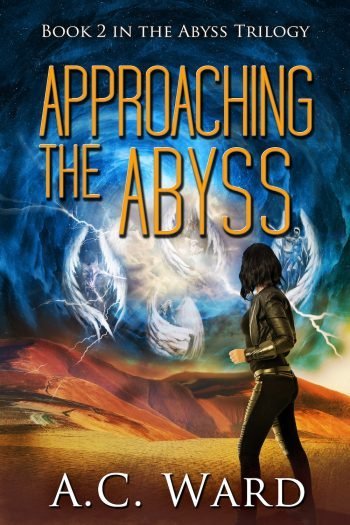 APPROACHING THE ABYSS (The Abyss Trilogy #2) by A.C. Ward

Synopsis
A new prophesy.
Demons on the loose.
Then the angels come to kill them all.

After her mother abandons her, Aubrey doubts her abilities more than ever. She failed to close the Abyss. Desperate to prove herself, Aubrey enters the demon realm only to trigger a new disaster. She releases the Four Horsemen of the Apocalypse. These angels are uncompromising in their purpose; to massacre humanity.

Aubrey alone has an immunity to match the angels, but it isn’t enough. She is faced with making a pact with a demon, or worse, her own mother. Aubrey must decide or lose those she care about. Will her choices prevent the apocalypse, or are they actually the steps leading to the end?

The second installment in the Abyss trilogy, a coming of age YA dystopian fantasy. Perfect for fans of dystopian worlds, apocalyptic prophesies, and angel lore.

Download today to find out if Aubrey will avoid Approaching the Abyss. 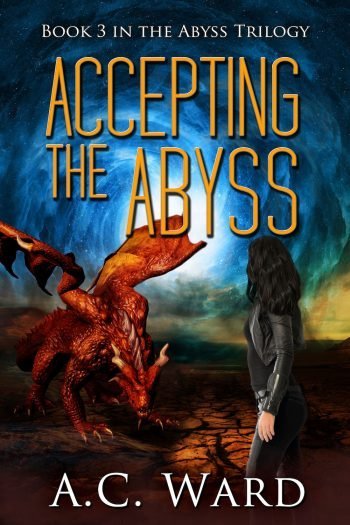 ACCEPTING THE ABYSS (The Abyss Trilogy #3) by A.C. Ward

Synopsis
The angels and demons are defeated.
Aubrey knows true happiness.
Then the Devil comes to destroy it all.

Aubrey had never dreamed that life could bring such joy. She has a family, friends, and is falling in love. She’s even mended her relationship with her mother. Together they’re working to change the way abilities are viewed.

But a final prophecy looms, one that threatens to destroy the world. The Devil offers her a deal; to choose her own happiness over the life of an innocent. Lucifer is charming, compelling, but not to be trusted. Neither are many of those Aubrey has grown to care about.

Aubrey has more to lose than ever before. Will she find a path to save humanity, or do all choices lead to the end?

The third installment in the Abyss trilogy, a coming of age YA dystopian fantasy. Perfect for fans of dystopian worlds, apocalyptic prophesies, and devil lore.

Download now to find out if Aubrey will end up Accepting the Abyss. 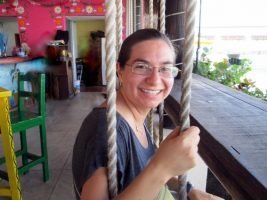 About The Author
Amanda (A.C.) Ward is a little worried that her internet search history is on some sort of watch list. For Death Daydreams, she researched serial killers, hidden rooms, death, suicide, and third-story falls. Her next work in process is only making it worse.

Amanda lives with her husband, daughter, and various pets – dog, cat, gecko, fish, and tarantula. When she’s not writing she’s watching Netflix or rereading her favorite manga. She’d love to hear from her fans. You can contact her at wardabooks@gmail.com.